Posted on December 3, 2014 in Uncategorized by Kelsey McNeely, Senior Reporter 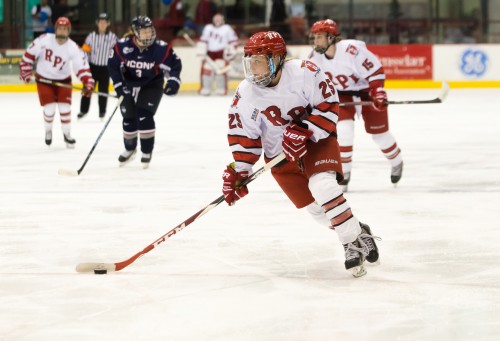 The women’s ice hockey team took on the Tigers of Rochester Institute of Technology on Friday, November 28 at the Houston Field House. The struggling Engineers came into the game with a 1-10-2 record.

The game started with a faceoff win by RPI freshman forward Shayna Tomlinson.

Lindsay Grigg scored the Tigers’ first and only goal of the night on a rebound from a shot by Mackenzie Stone, 2:23 into the first period. RIT’s lead was short-lived, as the Engineers scored three unanswered goals in the first period alone. A slashing penalty on senior forward and captain Ali Svoboda at 7:04 resulted in a Tigers power play. Although RIT had two good scoring opportunities, they failed to capitalize on the power play and the score remained 1-0.

Tomlinson tied the game 1-1 at 9:54 on a rebound from a blocked shot by sophomore forward Laura Horwood. Svoboda and Horwood were credited with assists. Freshman forward Marisa Raspa scored her second goal of the season, assisted by freshman forward Whitney Renn and senior defenseman Kathryn Schilter, at 16:20 to put RPI up 2-1. A holding penalty on Carly Payerl at 16:50 resulted in a power play for RPI; another RIT penalty at 18:18 on Jess Paton for tripping gave the Engineers a two-player advantage. RPI scored on its only shot during the power play as its four-player advantage ended. The power play goal, scored by Svoboda and assisted by Horwood and Renn, gave the Engineers a 3-1 lead going into the first intermission.

After a faceoff win by Grigg for the Tigers to begin the second period, the Engineers quickly gained control of the puck and got off four quick shots all saved by RIT goaltendevr Brooke Stoddart. Despite eight shot attempts by RIT and 11 by RPI, the second period was scoreless and the Engineers entered the third with a two-point lead.

Although no team obviously controlled the first half of the period, RPI easily dominated the second half of the period out-shooting RIT 11-5 in the third. The Tigers managed to hold off RPI for most of the period, until after numerous unanswered shots on the Tigers’ goal, a shot by senior forward and captain Taylor Mahoney found the net with 2:20 left in the game. This final goal increased RPI’s lead to 4-1.

With one win against RIT under its belt, the team looked to further improve its record on Saturday, November 29 in the second game of its home series but came up short. RPI allowed one goal each period and failed to score any of its own, resulting in a final score of 0-3. The Engineers ended the weekend with a 2-11-2 record. RPI hosts the Bears of Brown University on Friday, December 5, and the Yale University Bulldogs Saturday, December 6.