Posted on December 3, 2014 in Uncategorized by Joseph Saulsbery, Senior Reporter 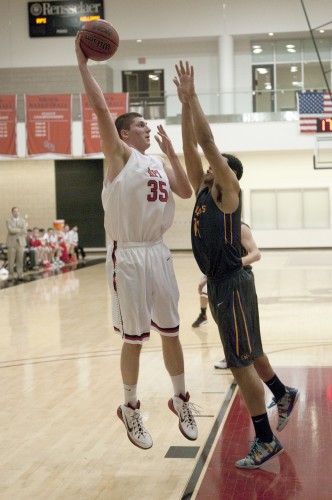 RPI men’s basketball fell against neighboring Sage Colleges last Tuesday night at East Campus Arena 77-65. After a tight first half in which neither side led by more than four points, the score at halftime was Gators 35, Engineers 33. This changed in the second half as Sage took control of the game quickly, going up by twelve with 12:35 remaining. A layup by junior forward Brian Hatcher put the Engineers within five with eight minutes to go. But RPI never came any closer. Fastbreak baskets by forward Melvin Ford and guard Jorrdan McCray put the Gators back up by 12 with 4:41 left, and the Engineers didn’t challenge the lead the rest of the way.

On Sunday, November 30, the Engineers traveled to Vermont to take on Middlebury College in a non-league confrontation. Middlebury came out of the gates hot in the first half, putting together a 14-3 run late in the first half to take a 10-point lead into the locker room. In the second half, Rensselaer shot a scorching 73 percent from the field to keep the game close. A jumper by junior forward Tyler Gendron put the Engineers within one just five and a half minutes into the second half. But Middlebury widened the gap by going on a 16-6 run to take a 69-57 lead on RPI with seven minutes left. Working the clock, Middlebury took advantage of its opportunities in the paint and sealed the deal by making seven of eight free throws in the final two minutes. The final score was Middlebury 87, RPI 78.

Leading the way for Rensselaer was Gendron, who scored 21 points and grabbed eight rebounds. Senior shooting guard Josh Dugas added 20 points and converted on all three of his 3-point opportunities.

For Middlebury, forward Dylan Sinnickson scored 18 points and hauled in eight boards. Guard Jake Brown led the Panthers in assists with five to go along with his fourteen points.

Lastly, on December 2, the Engineers hosted Williams College. The Ephs caught fire early, shooting 11-of-15 from behind the arc in the first half, and took a 56-39 lead into halftime. Then, in the second half, Williams slowed down the tempo and staved off each attempt by RPI to cut significantly into the lead. The Ephs maintained their distance and won by a final score of 86-69. For Williams, guard Hayden Rooke-Ley shot 10-of-14 from 3-point range and finished with a game-high 43 points. For Rensselaer, Gendron scored 18 points, while Hatcher scored 16 points and grabbed eight rebounds.

Following the loss to Williams College, RPI falls to 1-4 on the young season. The Engineers will travel to Orlando, Fl., to compete in the Land of Magic Classic against Ursinus College and Haverford College on December 28 and 29, respectively.