Posted on February 26, 2014 in Uncategorized by Conrad Mossl, Staff Reporter 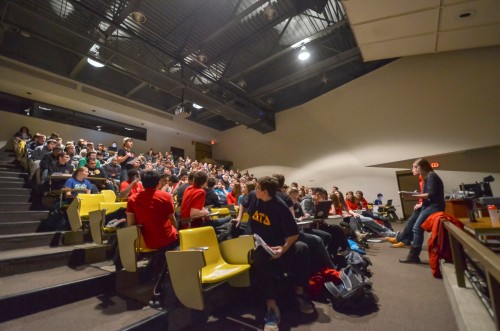 Joseph Shen/The Polytechnic
MEMBERS OF THE GREEK COMMUNITY AND STUDENT SENATE ATTEND open forum in large numbers about on the existence of the two Greek senator positions.

Update (5:41 pm, February 26, 2014): The original, online posting of this article was missing a section of the report. The issue has been fixed.

On Monday, the Student Senate met for an open forum to discuss changes in the Union Constitution that would potentially change the status of Greek senators. The forum was very well-attended and many points were brought up both by Greeks and senators regarding the Greek Senate positions and their roles.

The open forum included members of Senate and all concerned parties of RPI’s Greek Life Commons. This meeting was called to discuss the aspect of Greek senators and the possibility of their change in status in the Senate. Grand Marshal Chuck Carletta ’14 took the floor first, speaking to an audience of roughly 180 people, largely dominated by fraternities and sororities. He explained that the Constitution Committee has recommended changes that dissolve the Independent Council. They have deemed Independent Council and its senators to be lacking in purpose as it no longer represents a unique and powerful part of the student body.

However, during their discussions, senators brought up the fact that this removal of independent senators may give an advantage to the Greek senators who represent a more particular interest to the student body. Thus began the debate of the power of the Greek senators and what steps should be taken, if any.

Panhellenic Council representative Senator Lisa DeCrescente ’15, the first to speak to the audience, stated that the removal of the Greek senators would limit the scope of the Student Senate immediately. She then stated Article (3) of the Rensselaer Union Constitution which states that “[the] purpose of this Union shall be to unite all its members in a commitment to the ideals for which Rensselaer stands.” Associate Dean of Greek Life Commons Matthew Hunt then spoke and directly asked the senators if the perceived problem has been an issue before, to which the answer was no. Hunt then claimed that this entire forum was for a non-issue and the discussion was supporting a problem that had yet to manifest. He then stated that without the Greek senators, the entire community was liable to have their problem ignored by the Student Senate. This statement was echoed by many of the students who spoke at the meeting, most of whom gave various pieces of evidence.

A fraternity member reminded all that Greek life has been one of the oldest and most involved groups in RPI’s history. Being so, they also amount a fair number of problems and unique issues which only fraternities and sororities face, reported the fraternity member. As such, he went on, Greek senators are needed to be present to make sure that this large section of the student body has their specific needs met. Luke Reigot ’14, a brother of Delta Tau Delta, brought forward the fact that even as one of the biggest groups, they are not recognized by the Union and thus receive no funding from the Student Activity Fee. Because of the philanthropic, housing, and community services that Greek life provides, Reigot believes that they deserve special consideration in the realm of the Student Senate. Sigma Phi Epsilon brother Benjamin Bowles ’16 shared his belief that Greek senators ensure that there are representatives who will speak on behalf of the Greek community rather than that of the general student body and class year. He firmly spoke that if the Senate approved the removal of the senators or their vote within the Senate, it would simply take away from their social spectrum. This was added upon by Kelly Dearborn ’16, vice president of Alpha Phi, who specifically stated that her interests were best represented by Greek senators rather than her class-elected senator. Furthermore, she pointed out that since Greek life had a need for their own dean, this shows their need for specialized representatives. Several members, including DeCrescente, pointed out the Senate’s involvement in Greek life before, most notably through the use of the 286 CDTA route and the choice of Red Hawk shuttle stops. They noted that some Greek members were forced to take extensive travels to get to the chapter houses with certain shuttle stops having been eliminated.

These points from the students were also peppered in by some statements by members of the Senate. Throughout the discussion, Michael Han ’16 asked why this particular group required more attention than any other groups on campus. He disagreed with the idea that this was a non-issue and stated his belief that there was a possibility of an unbalance with independent Senate positions gone. Kyle Keraga ’15 shared his thoughts that he sees no reason to break a working status quo. According to Keraga, these positions had been around for years without conflict with voting balance. He does not believe that the dissolution of the Independent Council should affect Senate representation for Greeks. He recommended that instead of trying to fix a problem that doesn’t exist, the Senate should instead find new ways to better represent the Greek and independent communities instead of cutting these positions. Shoshana Rubinstein ’16 pointed out that, although the Greek community was at risk of losing their senators, they will still have their elected class senators to talk to. She stated that it was the class senators’ job to take all of their constituents’ problems into account during their political activity. She said that everyone should feel free to come up approach his or her senator at any time with any problem Student Senate may be able to help with. Christina Gilliland ’15 spoke about the Senate’s role in the aforementioned shuttle stop. She explained that it was not Senate’s decision to end the shuttle stop, and Auxiliary Services made the decision based on rider data. She hoped that these situations would not damage the student body’s faith in the Senate. She also noted that the Senate Communications Group held many outreach events and that, at a certain point, it is the responsibility of students to attend such events.