Posted on September 19, 2012 in Uncategorized by Wesley Mounts, Senior Reviewer 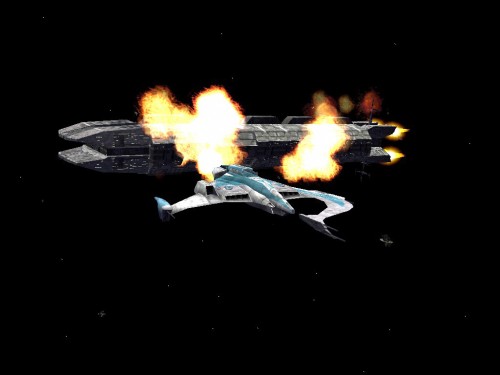 Many of you are probably expecting a review of Borderlands 2. Well too bad, mostly because most of the staff who writes game reviews for The Poly was too busy producing the paper you are currently reading to play the game. Instead, I will be reviewing an older game, a game in a genre that has all but disappeared from gaming: Tachyon: The Fringe.

Tachyon is a space combat game in the same vein as Wing Commander, the Freespace series, and Freelancer, and is set in the 26th century. The majority of the game takes place in the titular Fringe, a mostly-lawless region on the outskirts of colonized space controlled by rebelling colonists, corrupt corporations, wealthy barons, mad scientists, and a number of pirate clans. The primary story centers around the battle between a group of colonists called the Bora, who settled in the region hundreds of years before, and the Galactic Spanning corporation who have acquired the legal rights to Bora space (through somewhat shady means) in order to mine it. And depending on which side you choose to join, you see different faces for each side. Both sides engage in serious theft from the other, assault civilian transports, and both wind up allying with one or another of the aforementioned crazy men. All of this is executed to an excellent degree, especially considering the limitations of the era.

That said, the graphics are very clearly from the turn of the millennium, which may kill the experience for some players. When characters’ faces appear in-game, the animation to indicate they are talking is little more than their heads moving back and forth. However, this is mitigated by some exquisite voice acting. When any of the characters talk, their voices ooze with personality. The mad scientist speaks with the apathy and annoyance I would expect from someone who thinks he is better than me. The corporate pilots talk with the smugness of their technological superiority. The leader of the pirate clan’s voice conveys his completely reckless nonchalance whenever he talks to you. All of this is topped off with Bruce Campbell voicing the main character, going so far as to break the fourth wall with snarky comments whenever a cheat code is entered.

The flying controls are relatively simple to learn, but are quite difficult to master. It’s easy to be able to slide, roll, and use afterburners, but to do all of that while transferring energy from lasers to afterburners to escape an ambush while rebalancing your shields in order to survive the encounter make for some very tense moments. For ten dollars on Steam, this is definitely a good pick-up.