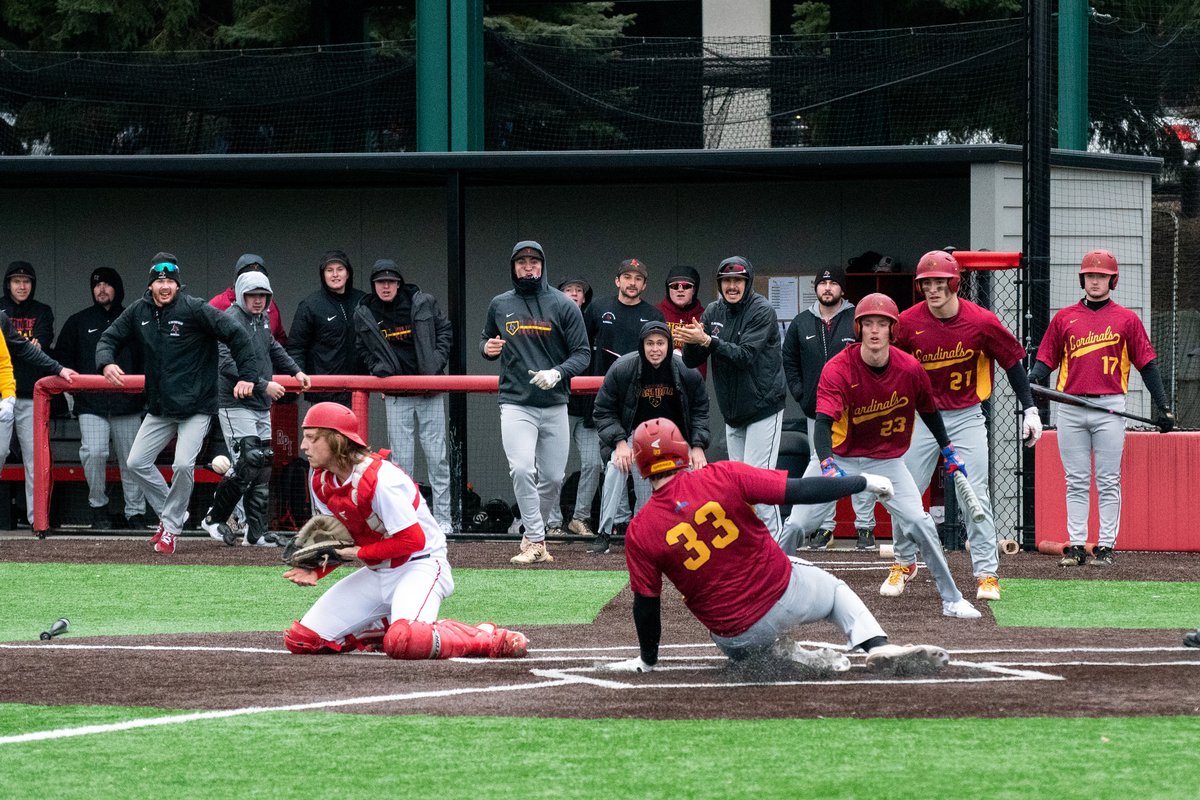 Starting the game at Robison Field at Karl Steffen Ballpark, Ryan Yerby (Gr) took the mound for RPI and St. John Fisher's Ben Lavery stepped into the batter’s box. On the first pitch of the afternoon, Lavery missiled a home run to right center field to score the Cardinals’ first run of the ballgame. 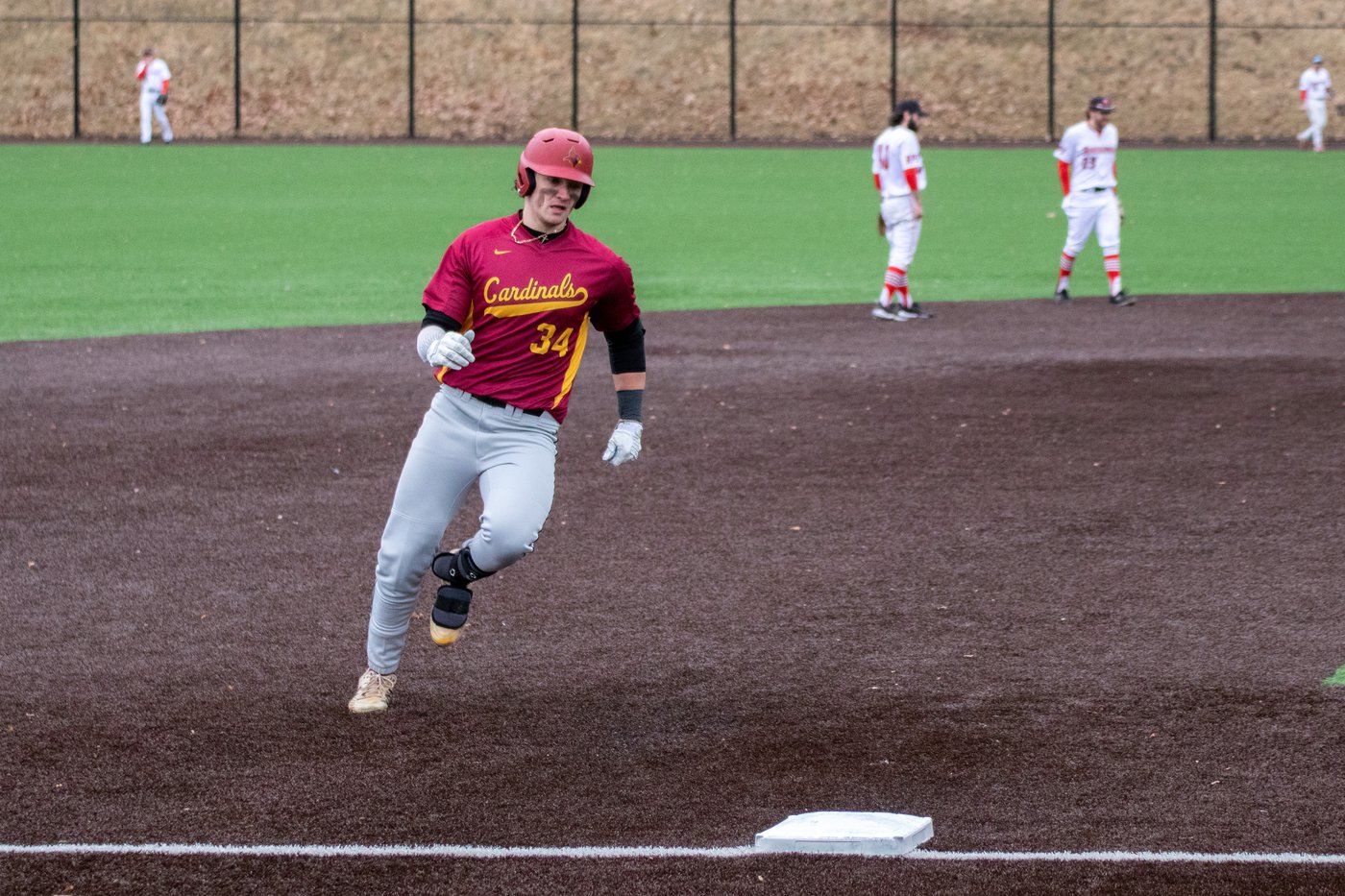 Yerby struck out the next batter and walked the following, putting a runner on base. On a wild 2-2 pitch, the runner sprinted for second, but catcher Hudson Livesey ’22 threw a bullet to second baseman Jack Moncur ’22 and the runner was caught stealing. After two consecutive walks, a strikeout ended the top of the first. RPI grounded out twice and struck out once to conclude the inning.

Chris Grome (Gr) replaced Yerby on the mound for RPI. Grome let up a double on the first batter, Nick Lemire. The next batter hit a sacrifice fly to right field to advance Lemire to third base, an RBI groundout bringing him in to score. Grome struck out the following batter for the third out.

Livesey hit a double to start the bottom of the second and Moncur was hit in the helmet by a pitch, putting runners on first and second with no outs. Martin Marintchev cannoned a hit off the wall in center field. Livesey and Moncur both came into score, tying the game at 2‒2. Two pop-ups and a lineout ended the inning.

The first batter of the third inning flied out to right field. On the first pitch of his at-bat, James Murphy blasted a home run to right center field to regain the lead for St. John Fisher. Grome struck out the next two batters to close out the top of the third.

After a groundout to start the bottom of the third, designated hitter Cole Paquin cranked a homer to left field to make it 3‒3. A single from the next batter was followed by a lineout and strikeout, stranding him on base. 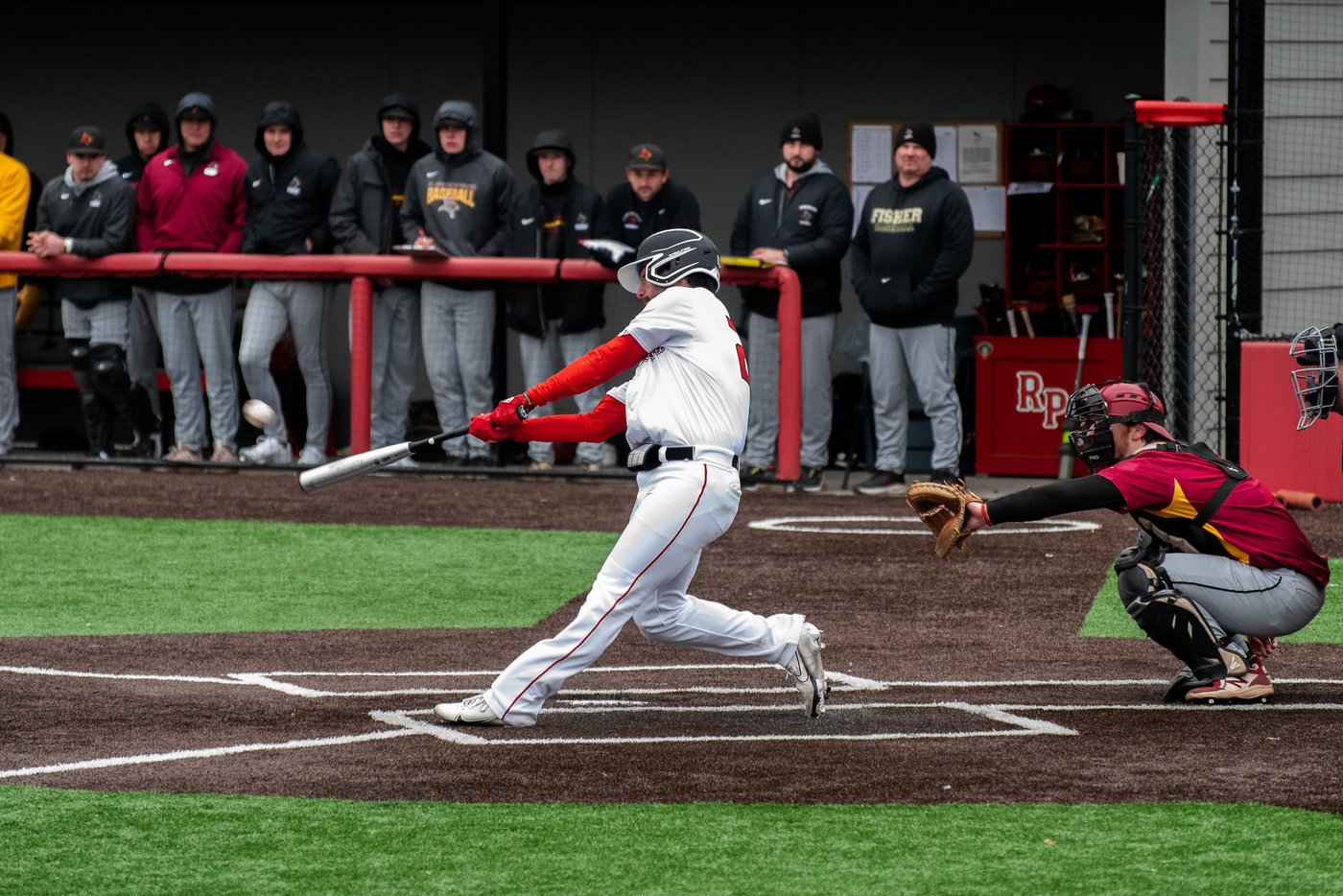 Ben Koomey ’23 took the mound for RPI to start the fourth inning, walking the first two batters he faced. A wild 2-2 pitch advanced both runners into scoring position. A groundout to first base caused confusion among the runners, both near third base. With the infield in a rundown between second and third, the lead runner came in to score. A flyout ended the top of the inning.

Marintchev was the first batter for RPI in the bottom of the fourth. He hit a ground ball to third base, but an errant throw enabled him to advance to second. Two strikeouts brought Jake Defayette to the plate with two outs and a man in scoring position. Defayette rocketed a two-run shot to right field, giving the Engineers their first lead of the game. A flyout by the next batter sent both teams back to their dugouts.

Another pitching change for RPI put Alex Vallee on the mound. He walked the first three batters he faced, loading the bases with no outs. With a full count, Cardinal Michael Beimel doubled off the wall in right center field, clearing the bases. Vallee forced two lineouts before giving up an RBI double down the right field line to, making the score 8‒5. After four earned runs, Vallee was replaced by Aidan Safar ’22. Safar walked his first two batters, loading the bases yet again. Luckily for the Engineers, Safar struck out the next batter looking.

Outs on the first two Engineer at-bats immediately put RPI in a hole. Livesey hit a ground ball that the shortstop couldn’t field cleanly, reaching first base on an error. Moncur was walked on the next at-bat, putting two runners on base. Up to bat next was Marintchev, who hammered a ground ball past the diving second baseman. Livesey rounded third and the right fielder darted a throw to home plate. The catcher caught the one-hop throw just as the runner was approaching, but Livesey avoided the outstretched glove and slid into the plate to reduce the deficit to two. A groundout ended the inning. 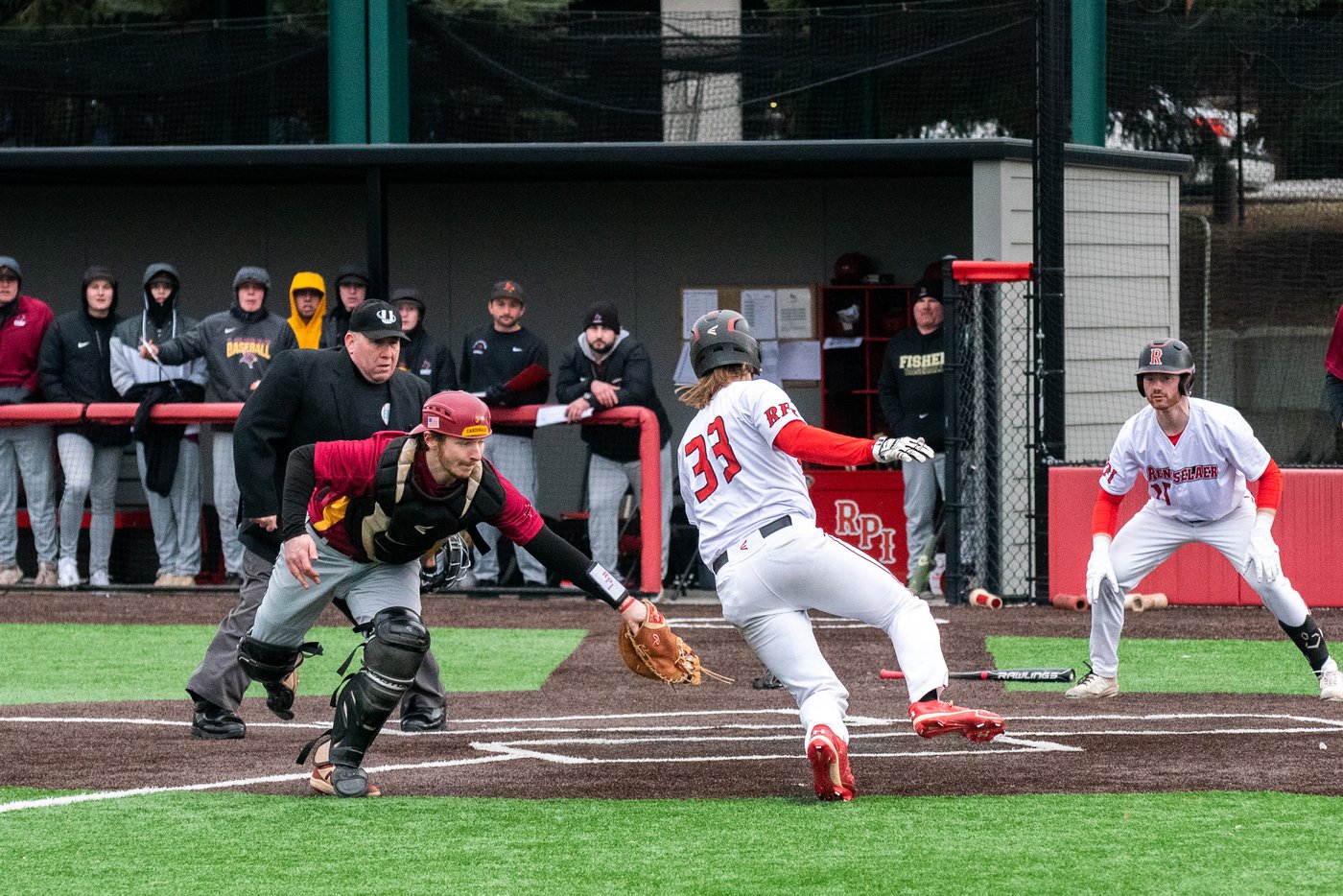 The Cardinals scored two runs on Safar to start the sixth off of a double and a failed pickoff. Safar was taken out of the game after a single put runners on the corners with one out. Cooper Hay ’24 came out of the bullpen and let up an RBI single to shallow center field. Hay ended the top half of the inning with a strikeout and a pop-up.

The first batter of the bottom half of the sixth struck out swinging, but three walks loaded the bases. In an 0-2 count, Joe Curci (Gr) hit a ground ball to third base for the 5-4-3 double play to end the inning.

After the first out of the seventh inning, an error and wild pitch advanced a runner to second base. The runner scored on a single to center field, bringing the score to 12‒6. After the first out of the bottom half of the inning, a walk and wild pitch advanced Moncur to second base. He advanced to third on a groundout and scored on an RPI double from Joey Saia ’23.

The Cardinals put up a two-hit, three-run top of the eight inning to take an eight-run lead. The Engineers were able to score two runs off of RPI singles from Livesey and Moncur. The game ended 15‒9. Marintchev and Defayette led the scoring for RPI with three and two RBIs respectively. RPI’s pitchers gave up 13 walks, six of which came around to score. 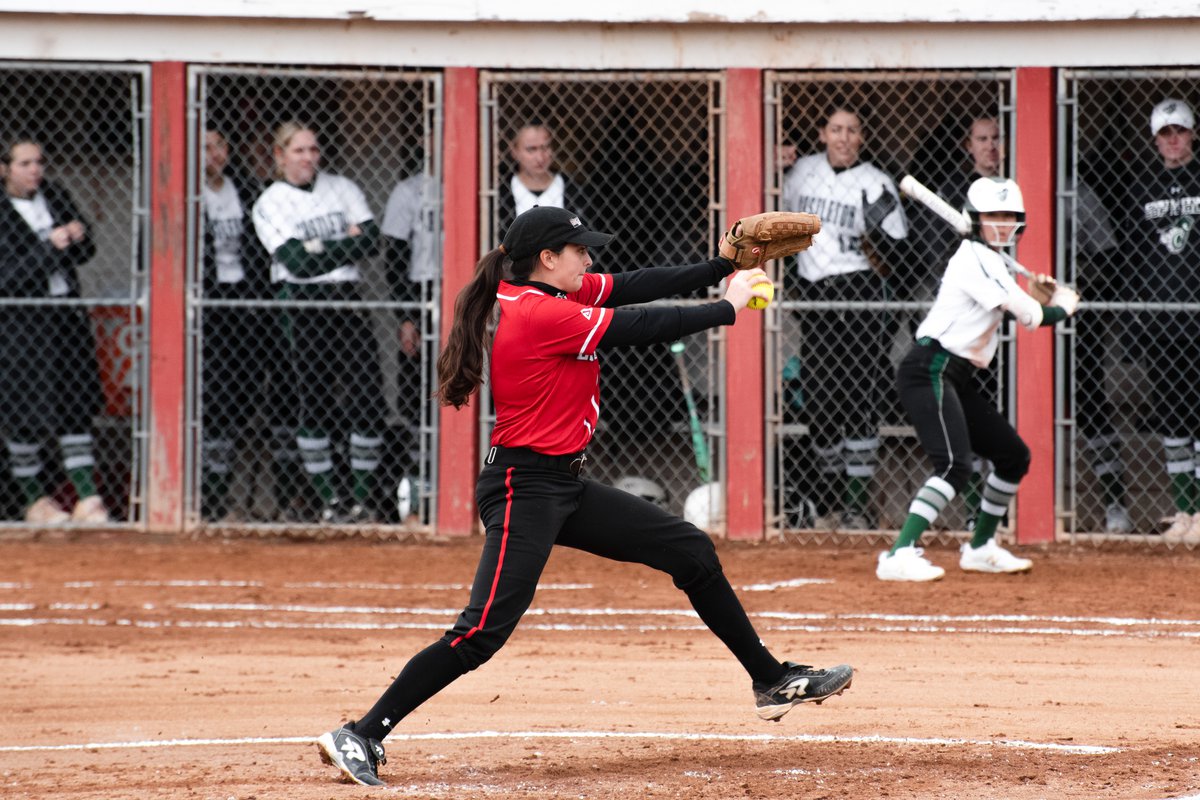 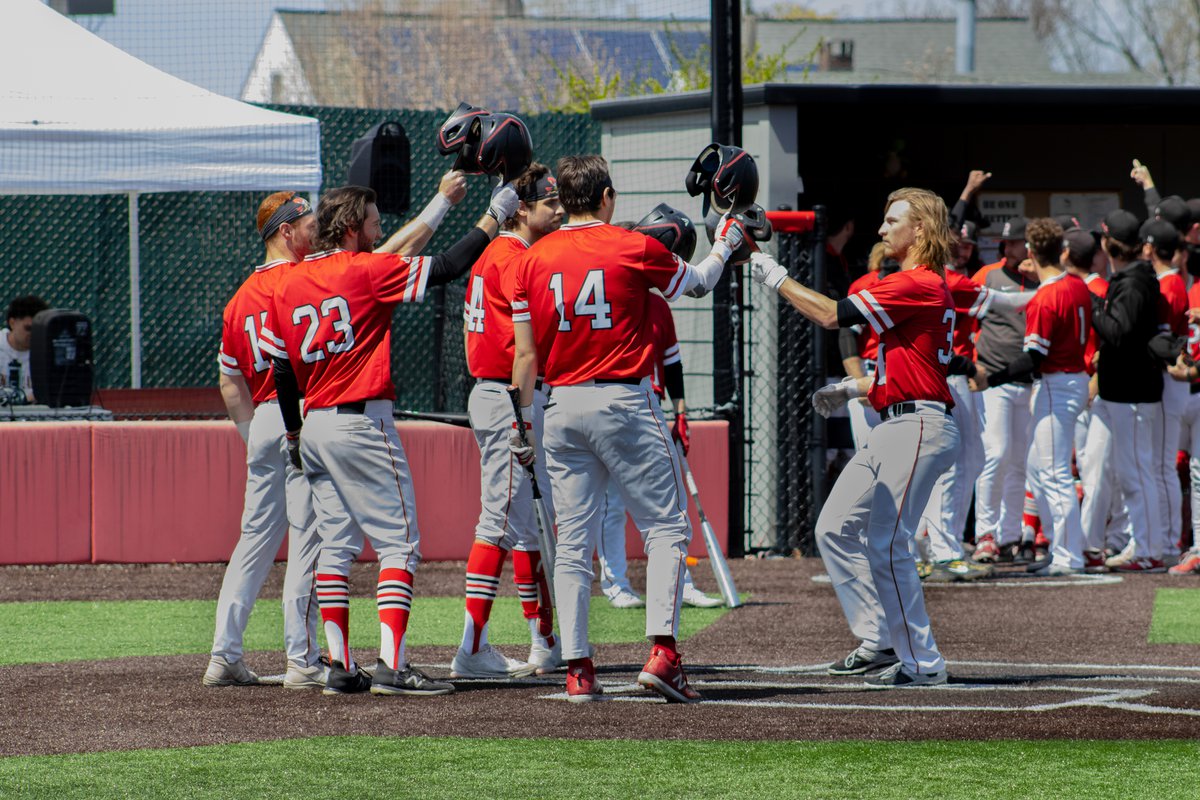 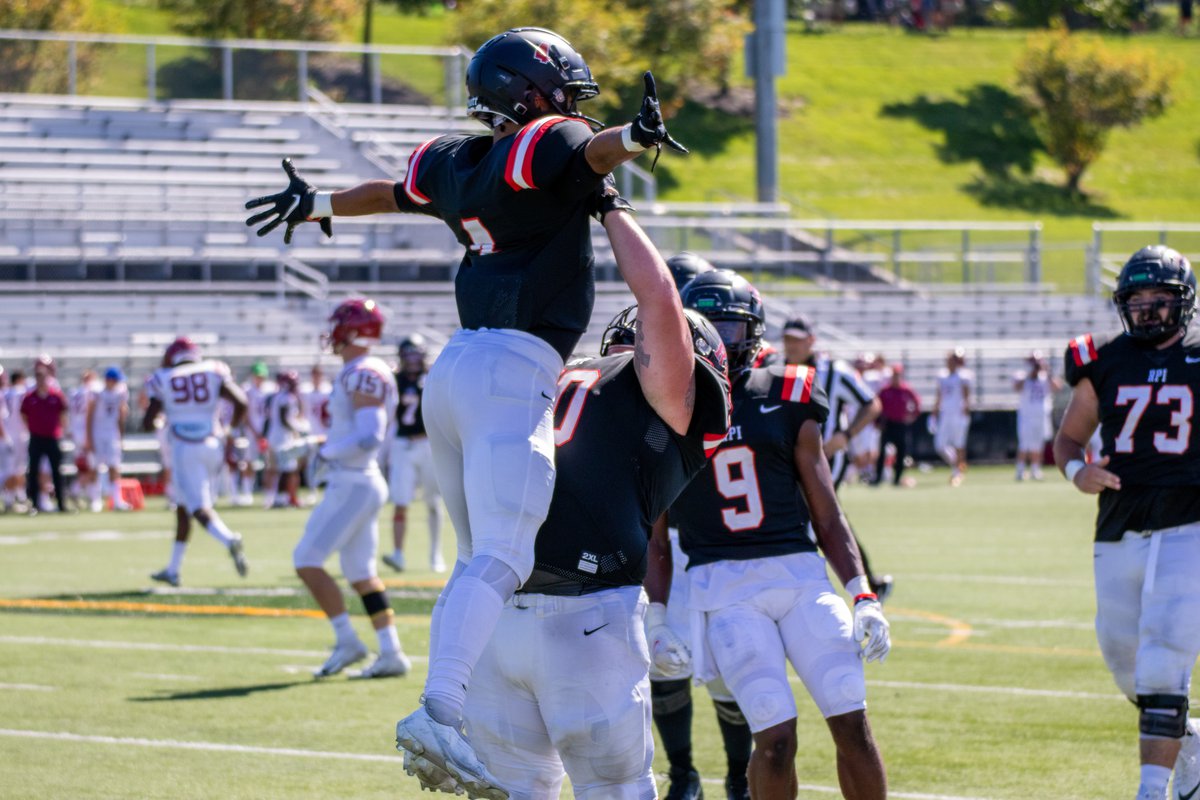