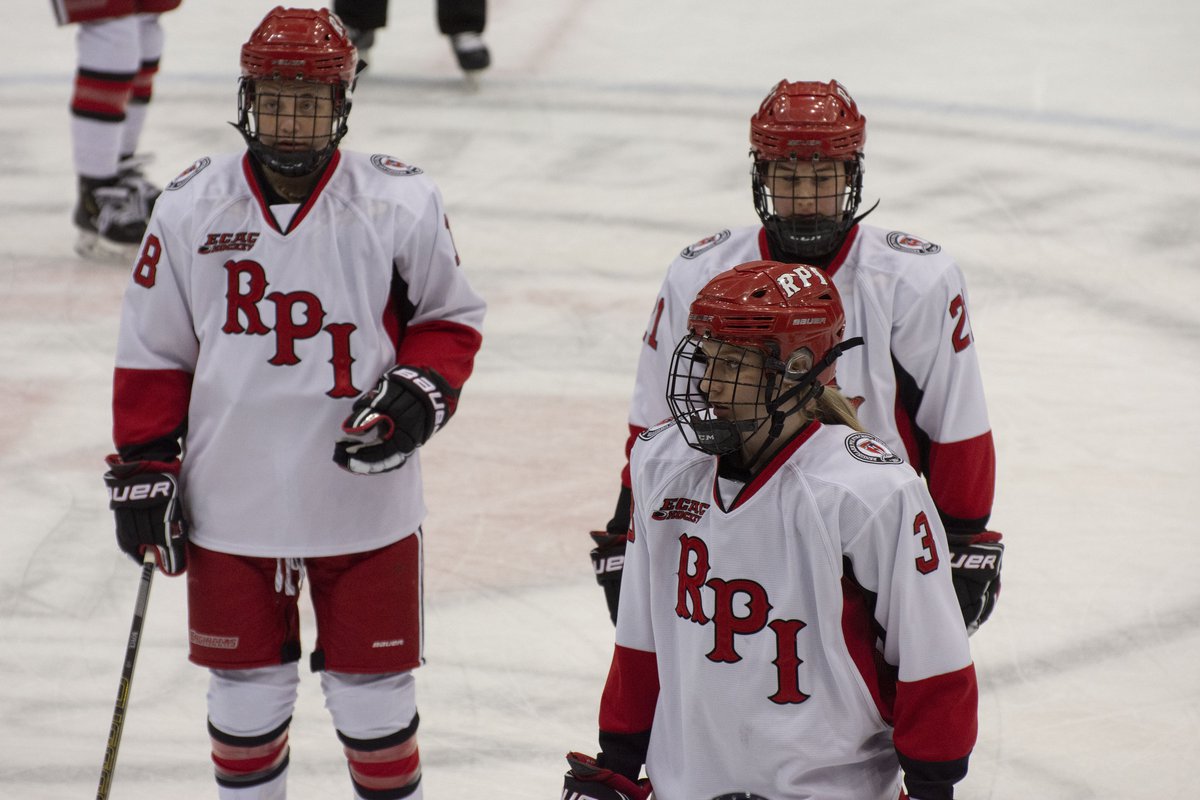 IN THIS FILE PHOTO, THE ENGINEERS SKATE back to the bench after a game. August Gehrman/The Polytechnic
By Andrew Days February 19, 2020

Harvard controlled the first ten minutes of play, pinning Rensselaer in their defensive end. With 14:33 left in the period, a turnover by Kendra Farole ’20 gave Harvard a chance to take the lead; a diving Hannah Price ’23 poked the puck away from Harvard forward Dominique Petrie before she could get the shot off.

The Engineers struggled with clearing the puck out of their defensive zone, almost as if the rink were physically tilted in Harvard’s favor. Despite their inability to relieve the pressure, RPI’s defense bent but did not break as they were able to block a considerable number of shots, due in part by goalie Ena Nystrøm ’23. Due to the defensive effort, the Engineers were able to pick up steam on the offensive end.

With 8:27 left to play in the first, a shot from Farole at the blue line gave forward Emma Hicks ’22 an opportunity to tip the puck while screening Harvard goalie Becky Dutton. Though she was unable to redirect it, Hicks’s positioning and Farole’s awareness showed that the Engineers were beginning to improve in the offensive third.

With 7:32 left to play, Brooke Jovanovich cut in from the left wing and took a quick shot that was absorbed by Nystrøm. Thirty seconds later, Emma Buckles ripped a slapshot from the blue line, caught cleanly by Nystrøm. With 5:31 left to play in the first frame, Harvard’s Sydney Sorkin took a shot through traffic, which was deflected during its flight. This redirection caused the puck to slide under Nystrøm, giving Harvard a 1‒0 lead. At the end of the first period, the scoreline remained the same and Harvard led shots on goal 11‒4.

In the second period, the Engineers came out much more aggressive. With 16:45 left to play in the period, Maddy Peterson ’23 weaved through the Harvard defense and took a wrist shot into the chest of Dutton. The Engineers were gaining momentum.

With 12:50 left in the period, Harvard’s Becca Gilmore found enough space to take a shot, but Nystrøm easily knocked it over the bar with her blocker. RPI took the puck back up the ice and 55 seconds later, Julia Blitz ’23 followed up on her shot and slipped the rebound through the five-hole of Dutton to equalize. The Engineers finally felt alive.

With 6:48 left to play in the second, Harvard regained the lead as Gilmore drifted in from the right wing and precisely slotted the puck into the bottom right corner. Less than a minute later, the Crimson came back up the ice and Petrie ripped a one-time shot right into Nystrøm. RPI’s grip on the game seemed to be loosening, but they were still fighting.

A checking call on Buckles with 4:27 left to play in the second period gave RPI a chance to tie the game up, however a short-handed Harvard controlled possession for the majority of the power play. When Harvard returned to full strength, they attempted a wrap-around on Nystrøm’s left post, but she was able to squeeze her pad against the post to close any gap. The second period ended with Harvard leading 2‒1 and shots on goal 24‒9.

In the third period, the Engineers appeared overcome by fatigue. Madeleine Burnett ’21 turned over the puck in the defensive zone, giving Harvard’s Kristin Della Rovere a breakaway; her shot found the back of the net and gave Harvard a 3‒1 lead. RPI’s defense survived the Harvard offense for the rest of the game, remaining solid throughout with timely saves from Nystrøm. The horn sounded for the end of regulation with Harvard taking the victory 3‒1 and leading total shots 67‒25. Nystrøm finished the game with a save percentage of .917, saving 33 out of the 36 shots on goal that she faced.