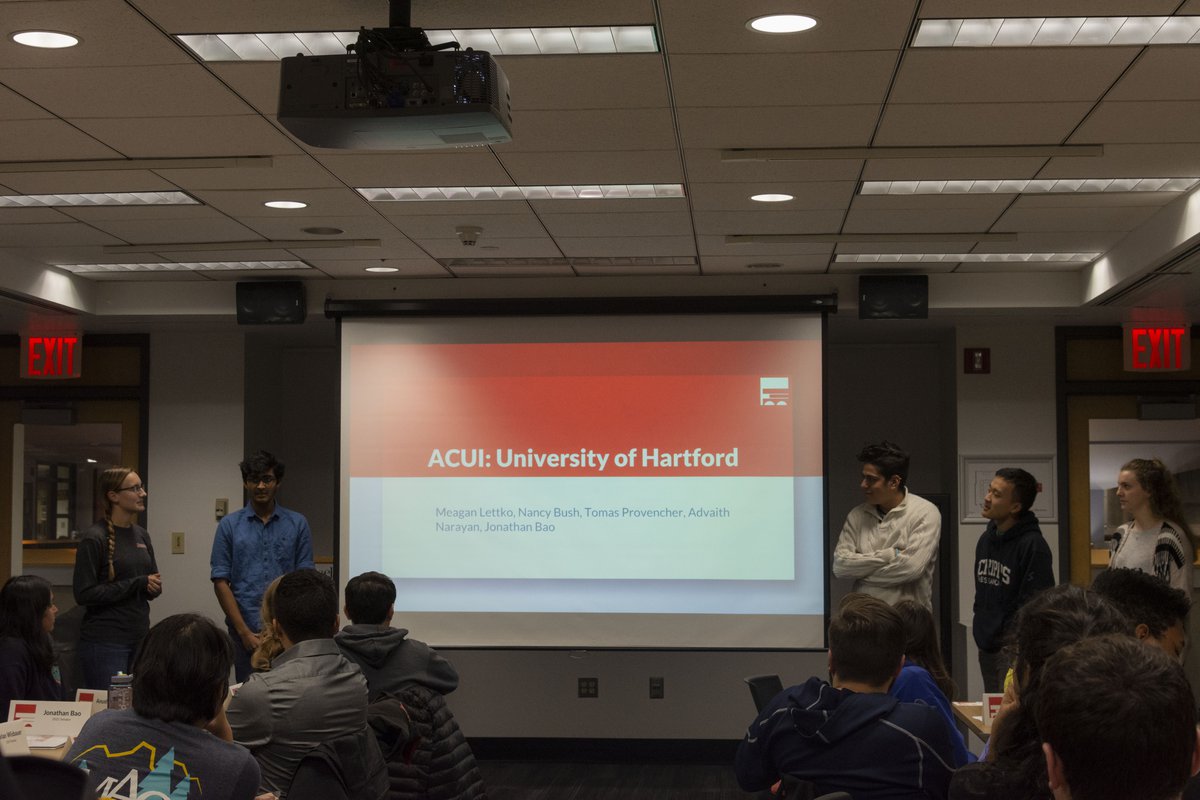 CONFERENCE ATTENDEES GUIDE Senate through a presentation about what they learned. Madeline Wilson/The Polytechnic
By Nicholas Luczak December 5, 2018

The members of the Senate attended events that focused on the role of student unions in their campuses and featured talks on issues like leadership, facilities, free speech, and student government principles.

Bush also went to a talk about “finding your carbon footprint,” which featured simple changes on campus that benefit the environment based on the example set by University of Massachusetts Lowell. According to Bush, the student body “taxes themselves” to create a $50,000 seed fund. They implemented changes such as using gallons of water rather than bottled, implementing a “bring your own plate” policy to events, recycling posters to make notebooks and business cards, ensuring that event items are needed rather than wasteful marketing items which are never used, and making sure that campus resources are all shut down before long breaks.

Narayan then presented on the responsibilities of student leadership regarding freedom of speech. He explained that senators have a duty to indirectly support students exercising their freedom of speech in order to preserve both administrative and student relations. He gave examples of how they could support protesting students with actions such as “[bringing] hot chocolate to students because it was cold outside.”

Provencher then shared his takeaway from a talk entitled “Fierce Conversations.” According to the presenter there are seven principles which you need to have a fierce conversation. These principles aim to drive real meaningful conversations, enriching relationships through active listening, and engaging the person you are speaking with in a genuine manner.

Then Lettko shared her insight about Assistant Dean for Campus Life at Clark University Tim St. John’s presentation. “His focus was a lot about finding your why, which is like finding what your purpose is and really staying true to that in whatever you’re doing.” Lettko said St. John emphasized being genuine, authentic, and staying true to your values. She also shared that leadership is about taking care of those in your charge.

Bao then talked about “how we should navigate our environments now” after going to the talk “Chuckles and Civility.” The talk discussed what is acceptable and not acceptable when joking. He talked about the differences between discomforting, offensive, and triggering speech and the varying levels of negative feelings they may cause. Bao emphasized that it is important to understand your community and discuss with them what their needs are.

Once the presentation ended, Grand Marshal Stef Warner ’19 concluded the meeting by telling the Senate, “Today I was walking through campus and I saw something that was alarming. There were posters on a building and it took me off guard. Please know that if you see something on campus, don’t keep walking; stop, call Public Safety non-emergency, go in and talk with the admin—there are people around that can help you. And even if you didn’t feel necessarily offended, someone else might, so just keep an eye out—because if you take care of it right then and there, it’ll get done sooner and other people might not have to see it.”

The Student Senate meets every Monday at 8 pm in the Shelnutt Gallery on the third floor of the Union.