Wolverines scar RPI in tough loss at home | The Polytechnic

Posted on October 28, 2015 in Uncategorized by Michael Baird, Staff Reporter 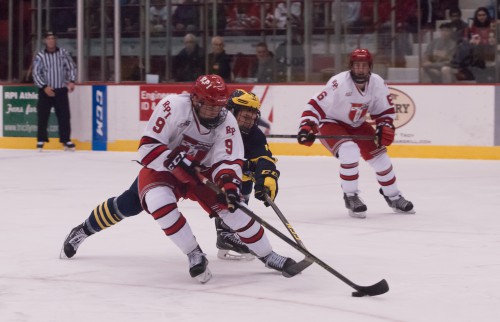 Emily Agoglia/The Polytechnic
MEN’S HOCKEY FACED another challenge this past weekend, falling 2-5 against the University of Michigan.

The Houston Field House was packed Saturday night as the Engineers hosted the University of Michigan Wolverines, currently ranked No. 10 in NCAA Division I Men’s Ice Hockey. Rensselaer won some battles but ultimately lost the war. At the end of the game, the scoreboard ominously read 5-2 Michigan. This is the RPI’s fourth loss of the season, and the largest thus far; but with 31 games left on the schedule, the season is still young.

At the conclusion of the first period, the Wolverines were up 1-0. Responsible for Michigan’s goal was forward Brendan Warren, who dumped the puck past senior goalie Jason Kasdorf from right in front of the net. The assist was credited to teammate Cooper Marody from off the back wall, receiving no interference from Rensselaer defensemen.

Only 28 seconds into the second period, Michigan forward Tyler Motte snuck the puck right past RPI senior goaltender Jason Kasdorf, much to the bewilderment of the crowd, to give Michigan their second score of the night. Motte came down the right side towards the goal, managing to evade senior defender Chris Bradley. Then, he made the shot while diving on the ice and sliding toward the back wall.

The first goal for the Engineers was made at 5:03 into the second period by senior forward Zach Schroeder. Wolverine’s goalie Zach Nagelvoort successfully blocked Rensselaer’s first two shot attempts, a slap shot by junior defender Parker Reno and a close-range sweep by senior forward Travis Fulton. But, in all the confusion in front of Michigan’s goal, Schroeder was able to collect the puck and send it into the goal.

But RPI’s retribution proved to be short-lived, for in a matter of about ten minutes, Michigan scored again, this time due to the swiftness of forward Tony Calderone. Calderone received the puck from teammate defender Joseph Cecconi, then maneuvered around sophomore defender Jared Wilson and slipped it past Kasdorf for the gain. This was the final goal of the second period.

Rensselaer’s final goal of the night happened late in the third period. In the minute preceding the goal by junior forward Jake Wood, RPI and Michigan were stalemated on Michigan’s half. Movement among the players was limited as Michigan’s defense was positioned in a fashion that made passing inconvenient for Rensselaer. The Engineers’ break came when an observant Wood noticed Wolverines defender Nolan De Jong stumbling. Acting on the fact that De Jong was no longer impeding his ability to intrude Michigan’s defense, Wood blew through the weak point and made the goal that raised the score to 2-3 Rensselaer.

The last two shots of the evening were made by the Wolverines. First, with 2:56 left in the third, Warren made his second shot of the game by tipping in the puck shot by Calderone from the center line enter the net. Next, with 1:34 left, another repeat offender from Michigan, Tyler Motte scored again for the Wolverines, this time on an empty net.

Hockey will be away at Union College on Friday October 30, then home against Union for Black Saturday.